Here is an example of what I am talking about: 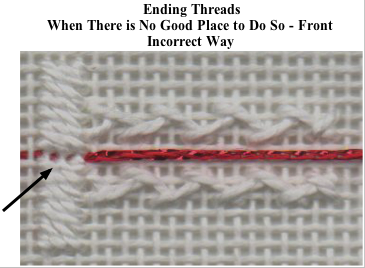 The arrow is pointing to the ending part of the red metallic thread showing through to the front.  The problem is intensified because the two cashmere stitches end right at the point where the thread is pulled across the back, showing through to the front.  I don’t quite remember what was above and below the metallic thread, just that whatever stitches were there were not suitable for ending the metallic behind either.  So I put in some herringbone stitches in white so that I could make my point. 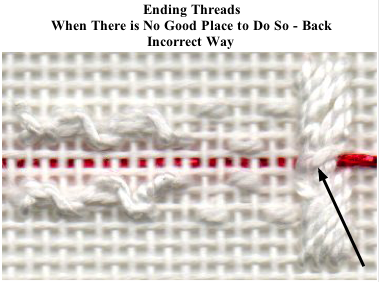 The arrow shows how the ending thread is pulled away from the red metallic thread on the front and through the white cashmere stitches on the back.  This is why you see the red thread from the front of the canvas.

The correct way to end those threads should not reveal any metallic threads showing through to the front, as shown below: 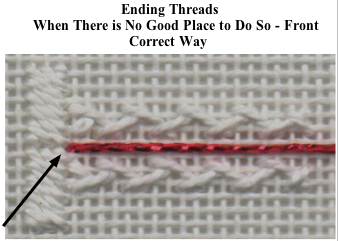 The black arrow points to the location that the red thread is taken to the back of the canvas and you can not see the any thread shadowing through to the front.  Just how did I end that thread without any red showing through?   Look at the back: 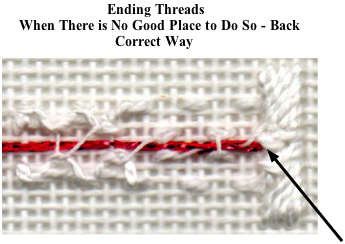 The black arrow points to where the red thread is brought to the back of the canvas and pulled behind the red thread on the front of the canvas.  I used a length of white sewing thread to tie down the thread on the back directly behind where the thread lies on the front.  Furthermore, to make sure that thread does not wiggle out, I pierced the metallic thread with the sewing thread in more than one place.  That thread end will not loosen or wiggle out of place - it will keep the front thread crisp and solidly in place.

Do not hesitate to whip or couch threads in place on the back of your canvas piece.  Piercing the ending thread will hold it stable.