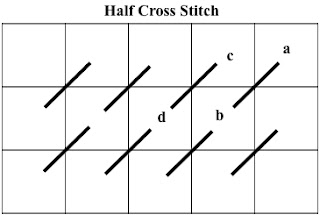 The Continental Stitch is another way to stitch the tent stitch, and does leave more thread on the back of the canvas.  The problem with the Continental Stitch is that it pulls the canvas on the diagonal, creating a large amount of distortion of the canvas, even when stitched with a frame.  If the piece is too badly distorted, then you will not be able to block it straight.  Even if you are capable of blocking it straight, it has a strong tendency to lose the blocking over time and going back to the distorted shape.  Here is the stitch diagram for the Continental Stitch, it may be stitched horizontally as shown, or vertically: 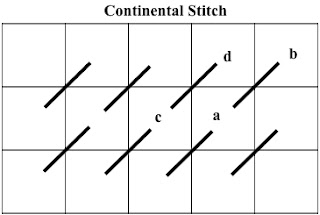 The third method of stitching the tent stitch is the Basketweave Stitch, and is the preferred way to stitch the tent stitch.  This method reduces canvas distortion by changing the pull on the canvas for each diagonal row, one row will create a vertical pull while the next row will create a horizontal pull .  Blocking is much easier with this method.  There is a firm and substantial backing to this stitch for greater durability.  There are two stitch diagrams for the Basketweave stitch because it depends on whether the first canvas thread that is stitched over is a vertical thread of a horizontal thread.  All Basketweave Stitching is done on the diagonal. 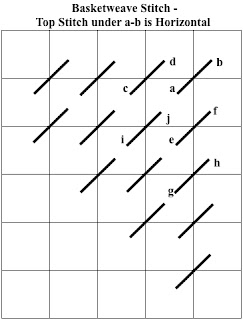 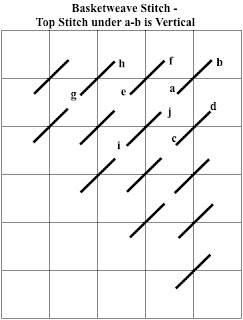 Here is what I mean by the thread of the canvas being vertical or horizontal:


Let’s look at all three stitches stitched on 18 count canvas with 4 strands of Splendor silk.  From left to right: Basketweave, Continental, Half Cross.

Basketweave Continental      Half Cross
And the backside of the canvas looks like:

The Half Cross Stitch method -

Here are a few things to notice:
a.  There is very little thread on back, and I don’t know how to bury that ending thread under the thread on the back.
b.  At the end of the rows the stitches are slightly distorted because of how the thread moves on the back of the canvas.
The Continental Stitch method -

a.  There is a uniform look to the stitches on the front of the canvas.
b.  The thread on the back has the look of a Basketweave stitched when stitching with a frame.  If you use the sewing method, the vertical threads will be the same width as the horizontal threads and look truly like a basketweave.  I am not suggesting anyone use the sewing method!

One last item for this blog: burying your ending threads.  Many people bury their threads on the diagonal.  Here is an example of this with the Basketweave Stitch: 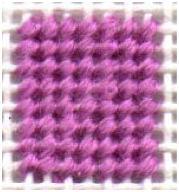 I increased the size of this image sample, hoping that you would see the diagonal ridge that formed when I buried the threads on the diagonal.  You can see it clearly in person, but not well here with the image.  Here is the same sample with the area pointed out: 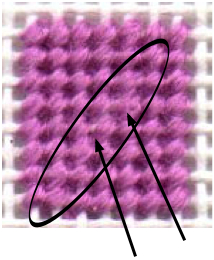 The oval shows the area where the ridge appears and the arrows point at stitches on the front of the canvas that were moved (distorted) by burying the threads into the stitches on the back.
So, NEVER bury any threads on the diagonal when you stitch with the Basketweave Stitch.  Only bury threads vertically and horizontally.  One more thing, don’t bury threads deep down into the stitches, for any stitch, as this will cause the threads on the front to move and look bad.
One point about blocking: blocking a tent stitch piece that is stitched in wool that has distorted the canvas will straighten the canvas somewhat - miracles rarely happen if the distortion is severe.  If you stitch with silk, there is no way to get rid of the distortion.  Wool has elasticity in it and will move, allowing you to straighten distortions in the canvas, silk will not move if you try to block a distorted piece.
The next blog will have more tips for stitching tent stitch with the Basketweave Stitch method.

Email ThisBlogThis!Share to TwitterShare to FacebookShare to Pinterest
Labels: basketweave