As a needlework teacher, I get asked a lot about where to stop and start threads and how to carry travel threads in an open stitch pattern.  So let’s take a look at just such a pattern.  I have created a stitch pattern from the Canterbury Cathedral Aisle vault.  It is a beautiful pattern and it will create many different looks depending on your thread choices.
Here is a picture of the pattern I developed.  We will start with the first step in this blog post and will follow with the next two steps in future posts and I will discuss how to determine where to start and stop threads and how to carry the travel threads so they will not be seen.
Here is the stitch diagram for the first step: the gold crosses, or diamond shapes, depending on how you look at it. 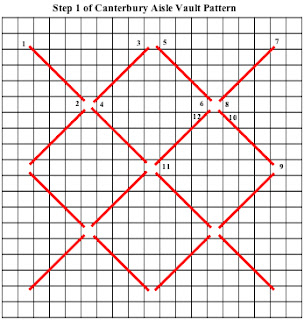 I used Kreinik #4 Very Fine Braid #102, pearl gold on 18 count lt. blue canvas
With an open canvas design, knowing where to anchor threads is always an issue, and this is how you determine the location of your waste knot.  First, you want the angle of the start of stitch 1 to be the same as stitch 3 which is slanted in the same direction on the front canvas.  This is a very important concept to stitching - the angle the thread on the back of the canvas makes with respect to each stitch should be consistent, this angle affects how the stitches look on the front of the canvas.  I will cover this more in depth in a future post, but for now, this is enough to get started with this stitch.  The angle you want your thread at prior to bringing your needle up at the place marked 1 on the diagram is shown by the red dot below: 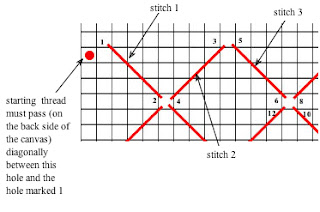 So place a waste knot diagonally off to the lower left, keeping to the true diagonal of the canvas.  This will help you see how the first stitch should lie, so when you cut that knot off you will remember that the thread should be anchored in the direction the thread lies.  If there are stitches to the left of the pattern, then cover the waste thread before cutting the knot off.
OK, that works if there are stitches to the left of stitch 1, or there will be after future stitching.  But what happens if there are no stitches there?  Then the starting thread must be anchored behind the actual stitching of the open canvas pattern.  Which means you will need to have the thread lie directly behind the stitches on the front side of the pattern.  Open patterns are not very good at holding the ending threads (especially with correct tension), because they are not very dense, so another means of securing the threads is necessary.  Also, metallic threads tend to be thicker threads and do not always hide well behind the stitches on the front of the canvas.
So here is how I handle the ending threads, it is a multi-step process:
The same technique is used when you end your thread.
As for travel threads for Step 1.  I am using a running stitch/backstitch method of stitching which will hide the travel threads behind the threads on the front of the canvas.  Two items to keep in mind:  first, starting and stopping at the edge of the area you are stitching is preferable, it is easier to anchor those starting and stopping threads; and second, this method needs to be stitched with consistent tension on the running stitch part and the backstitch part.  Many people have a very taut backstitch but the running stitch is a little more loose.  This shows on the front by a little bit of raised running stitch.  So watch the tension - practice will help and knowing that this happens does as well.
If all of this seems rather like a lot of work - it is more work than starting and stopping threads when using a stitch that fills an entire area (called a filling stitch.)  However, the open canvas patterns can be truly beautiful and you’ll be so much happier if you can’t see any threads that should be hidden on the back.
Do I use this technique all the time?  No, sometimes I am lazy.  However, I can tell the difference when I look at it.  If you want to submit a piece in a judged exhibit, take the time to do the more time consuming method.  I’m a needlework judge, it makes a difference.
Next time I will cover Step 2.
Posted by Joni at 1:37 PM

Email ThisBlogThis!Share to TwitterShare to FacebookShare to Pinterest
Labels: thread travel on the back of canvas